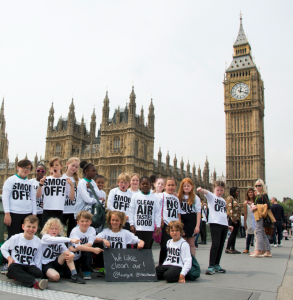 The young singers who attend Gayhurst Community Primary School in Hackney, are members of the ‘I Like Clean Air’ campaign. It was formed by parents in September 2014, concerned about the impact of poor air quality on their children’s growing lungs.

The BLF is working in partnership with the choir, highlighting to politicians that harmful pollution exists across many parts of the UK.

The MP for Neath, Wales said: “Children are particularly at risk of lung disease caused by pollution. This powerful song highlights why we all have a duty to clean up the air we breathe, and I support the BLF’s call for monitoring of pollution levels around schools.”

3,000 schools across the UK are located in areas with illegally high levels of air pollution, according to a report by DEFRA, published last year. Very few schools have air pollution monitors around them.

Dr Penny Woods, Chief Executive of the British Lung Foundation, said: “Pollutants can stunt the growth of children’s lungs and could cause lasting damage. It’s a worry for everyone, making existing lung problems worse, increasing our risk of lung cancer and early death more likely. We must all play a part in reducing harmful pollution.”

About the British Lung Foundation:

The British Lung Foundation is the only UK charity fighting to help the 1 in 5 people in the UK affected by lung disease, by researching new treatments, campaigning for better awareness and services, and providing support and advice for patients, carers and family members. For further information, please visit www.blf.org.uk. For help and support, call the BLF Helpline on 03000 030 555.To donate £5 to help the BLF fight lung disease, please text LUNGS to 70500.

‘I Like Clean Air’ was established in September 2014 by solicitor and mother of three boys Shazia Ali-Webber. Shazia was concerned about the impact of poor air quality on her children’s lungs. She got together with other parents and children from Hackney to measure air pollution levels in their area. The group raises awareness of air pollution and its public health impact especially on primary school children.

Read the story so far