d.o.v.e workshop will be recognising EQUAL PAY FOR WOMEN and celebrating INTERNATIONAL WOMEN’S DAY by showing the film ‘Made in Dagenham’ on Thursday 8th March 2018 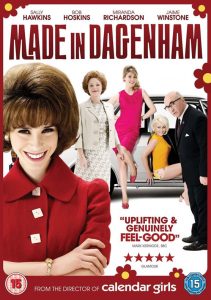 From the Director of Calendar Girls, Made in Dagenham will have you cheering in your seats!  It is an inspiring story of women machinists in Ford’s car plant in Dagenham who fought for equal pay in 1968.  The Dagenham women machinists walked out when they were regraded and paid 15% less that the rate received by men.  The strike lasted three weeks.

The women were supported by Barbara Castle MP and in 1970 Parliament passed the Equal Pay Act.

On International Women’s Day we pay tribute to the women from Dagenham who played….‘a very significant part in the historic struggle for equal pay….

Doors open at 7.00pm. Entrance by ticket only!  Tickets £3.00 each, refreshments available