It’s not every day you can meet a few Fantastic Beasts in Neath, despite what some may have you believe! But that’s exactly what will happen if you visit a local café this summer.

Café 46, which opened in February 2014 is an independent coffee house serving a great selection of food and arguably the best flat whites in Neath. Situated at the top of Queen Street, it’s become a real anchor in the town for coffee lovers, a model example of modern café culture, and on Friday 22nd June, a little bit of Hogwarts arrived in the shape of their newly refurbished garden space.

Owned and run by husband and wife duo Lee and Giuliana Howard, Café 46 has seen its patronage grow and grow since it first opened its doors, so much so that they’ve had to expand. The garden space is just the first phase of the expansion plans, and within the next six weeks they’ll also be moving into next door, doubling their current capacity.

Officially opened by Neath MP and Shadow Secretary of State for Wales Christina Rees, the garden space must be seen to be believed and with exceptional attention to detail it demands repeat visits to take it all in. Accompanying the outdoor seating are 4 Harry Potter-themed huts, creating a series of snugs to get away from it all whatever the weather. The scene is complete with an incredible bespoke mural and enchanting music straight out of the Ministry of Magic.

Speaking at the opening, Lee Howard said: “We’ve always been committed to reinvesting in the business, and any profit made during the past 4 years has gone into improving the café and customer experience. The garden and extension into the shop next door is the natural progression of that ethos.

Giuliana added: “We are delighted with the end result and hope our customers will be too. We want to thank the team that worked tirelessly on creating the garden space, and we also want to thank the people of Neath for their continued support.

Christina Rees said: It is an honour to be asked to officially open the new garden at Café 46, and I am hugely impressed at what they’ve achieved. I first came to Café 46 back in the summer of 2014, and it has been a favourite of mine ever since. I’m incredibly proud of the commitment Lee and Giuliana have shown to the great town of Neath, and it’s nice to hear of such a brilliant success story. 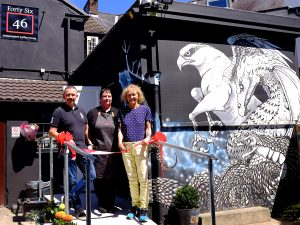 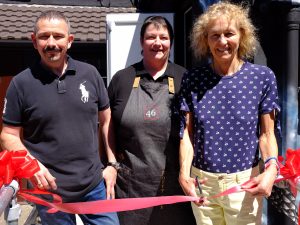 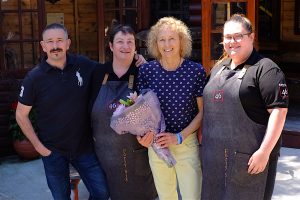