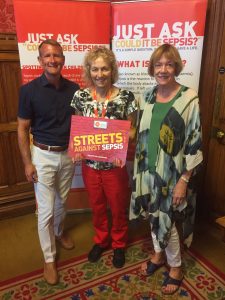 Christina Rees, MP for Neath, has spoken of the importance of educating younger people on the signs and symptoms of sepsis, a rare but serious complication of an infection which claims around six million lives worldwide every year.

The intervention comes as Coronation Street, the ITV soap, plans to develop a devastating storyline in which Jack Webster, played by seven-year-old Kyran Bowes, contracts sepsis and is sent home from hospital after doctors miss the underlying condition.
His family will face the agonising prospect of amputating his leg in order to save his life.

Christina said:
“It is crucial that we educate younger generations about the warning signs of sepsis, and I hope to work with local schools and the UK Sepsis Trust to do just that.
“If you, or someone you know, feels feverish, fluey, has a chest or water infection and begins to feel much more unwell than you have ever done before, just ask, ‘could it be sepsis?’ “We all have a responsibility to learn about the signs of sepsis.”

UK Sepsis Trust chief Dr Ron Daniels BEM said:
“I want to thank Christina Rees for speaking up about the importance of educating young people about sepsis. Stories like Jack Webster’s on Coronation Street remind us of the devastating cost of this condition.
“Sepsis affects at least 250,000 people every year in the UK and claims 44,000 lives – more than breast, bowel and prostate cancer, and road accidents combined.
“It’s incredible that Coronation Street is raising the profile of a condition which affects so many people, and yet until now has been so poorly recognised.”