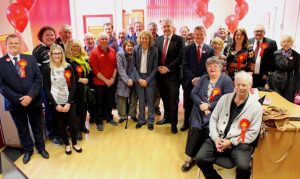 Despite claiming on several occasions that there would be no early election, Theresa May changed her mind, and on the 18th April called a General Election for the 8th June. The Tories fought the election on the premise that the country would return them to Government with an increased majority and a mandate to deliver the Brexit they were proposing, based on a “no deal is better than a bad deal” premise. Things did not work out for them in the way they had imagined, and Labour’s campaign of hope meant we gained over 30 seats, including 3 in Wales. We fought an excellent campaign in Neath, thanks to all who helped, which saw Chris returned with an increased majority, over 56% of the vote, and over 5,500 more votes than in 2015!