On Monday I was in the chamber for the Prime Minister’s statement on the European Council. I also had the chance to listen to Yvette Cooper challenge Cameron to ‘show some leadership in Europe, not just outside Europe, and let us do our bit to help those who are arriving directly on Greece’s shores.’ Mr Cameron said that he ‘wants to see 1,000 refugees brought to Britain by Christmas.’ I look forward to his promised report after Christmas to see if he has delivered on this.

Tuesday morning I attended Kevin Brennan’s urgent question on the action the Government are taking to secure the future of the steel industry. Kevin, as ever, nailed it when he asked the Secretary of State ‘Why has he so far been so reluctant to defend the British steel industry during this crisis, when it is so important to our strategic national interests?’ 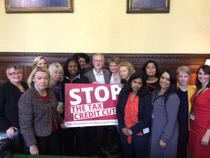 On Tuesday afternoon I was in the Chamber again to vote with the party on our attempt to stop tax credit cuts. I was devastated to see the bill fail, especially after seeing so many backbenchers on the Government side speaking out against the cuts. I now encourage people to sign the Labour Party petition to show the Tories that their ideologically-driven cuts to welfare are not what the country wants. In the meantime I urge everyone to sign the party’s position online:

On Wednesday I attended Prime Minister’s Questions and tried my best to bob up and down to get a question in, unfortunately the Speaker’s eye never caught my own. Better luck next time I suppose!

On Thursday I voted against the government’s English Votes for English Laws (EVEL) bill. Chris Bryant, the Shadow Leader of the House, was right as ever when he said that ‘this is a charter for breaking up the Union, not keeping it together.’

On Friday I attended the opening of Resolven skate park with the Resolven County Councillor Des Davies. It’s great to see infrastructure like this being built for young people in the constituency, although the chance of me getting my skates on is highly unlikely!

Saturday meant being back on the campaign trail again, this time in Glynneath, with a hardy group of volunteers knocking doors to spread the Labour message in preparation for the Assembly elections next year. Reg the campaigning dog was sadly absent this week, fingers crossed he can fit Neath into his busy campaigning schedule next week!

On Tuesday, I participated in the Westminster Hall Debate proposed by Nick Smith, MP for Blaenau Gwent, on Individual Electoral Registration and the 1.9 million people who will be left off if we don’t register them. I managed to intervene to ask him whether, ‘the Government should note the Association of Electoral Administrators’ recommendation that legislative changes should be implemented to allow Electoral Registration Officers to block-register people in institutions such as sheltered accommodation and university halls of residence.’ A statement which Nick agreed with saying that ERO’s have been ‘undermined’.

I managed to intervene again a little later on to ask the government minister, John Penrose ‘If the transition is brought forward a year, that leaves less time to check out those 1.9 million people. That applies only to the people who were on the register in the first place. What about 18-year-olds and other people?’ The Minister’s response didn’t register, as he said, ‘We don’t remind people nine times about their TV licence or anything else.’

On Wednesday I went to the APPG about Children in Wales where we had a discussion about Kinship Care in Wales talking about focusing on kinship carers who take on the task of raising children aged 0-18 when their parents are unable to look after them.

This week I also helped amend the Maximum Number of Judges Order 2015 via a statutory instrument to increase the number of judges on the Appeals Court from 38 to 39.