On 24th May I attended a reception at the Houses of Parliament held by animal welfare campaigners League Against Cruel Sports, highlighting the horrific reality of dog fighting.

I heard about Cupcake, a Staffordshire bull terrier, who became the ‘poster dog’ for a campaign which is calling for tougher sentencing and a national register to tackle the scourge of dog fighting across the UK.

A dog fight takes place every day somewhere in the UK. Dog fighting is not purely a matter of animal welfare. Evidence from the UK and abroad points to the activity being a ‘gateway’ crime to serious and organised offences, such as drug and gun crime. In the United States dog fighting is recognised as a Grade A felony by the FBI and the practice of tackling dog fighting to prevent other crimes is well established.

“There are thousands of dog owners in my constituency and I know you will be shocked to hear how animals in the dog fighting world are abused.

“We are a nation of animal lovers, so we need to treat our pets with the respect they deserve. Further action is needed to tackle this sadistic bloodsport – including stiffer sentences as a deterrent to those who force dogs to fight one another.”

Hundreds of steelworkers from across the UK joined myself and colleagues on the march in London on Wednesday 25 May, demanding that the Conservative government ensure the responsible sale of Tata Steel’s UK assets and delivers a proper industrial strategy that supports the entire steel sector throughout the current crisis and into a profitable future.

The march, was organised by the three main steel unions: Community, Unite and GMB, it started at London’s Embankment which then seen the steelworkers walk down Whitehall and past Downing Street. It finished near the Houses of Parliament.

Union members from Tata Steel and several other major steel companies took part in the event. 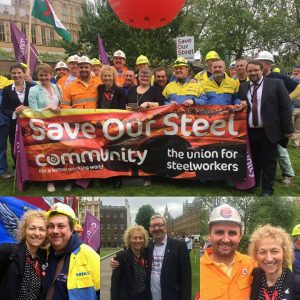 On 25th May I met with guide dog owners in the Houses of Parliament to hear about their experiences of being turned away by businesses. Over 100 guide dog owners travelled to Westminster from across the country to talk to their MPs about the discrimination they face in their daily lives.

I give my support to the charity Guide Dogs’ “Access All Areas” campaign to ensure guide dog owners can carry out everyday activities such as travel by taxi or go to the local shops, without the risk of being turned away.

I am supporting Guide Dogs’ call for disability equality training, and for offenders to be properly punished under the law when they illegally discriminate against guide dog owners.

On the 26th May in The Business of the house debate I Asked the government “May we have a statement on why the Government will not adopt my nifty, ready-made private Member’s Bill on adding mothers’ names to marriage certificates? The Queen’s Speech was a bit light, so there is plenty for room for it. The Deputy Leader of the House has just said that there are 21 new Bills; please make it 22”

On the afternoon of the 26th May I attended the Work and Economy debate and was able to give the following speech “The Queen’s Speech was a missed opportunity to change course on the decision to make cuts that will result in 2.5 million working families losing more than £2,100 a year, the impact of which will be to hit the vulnerable people in our society the hardest. The opportunity provided by universal credit to create a simpler benefits system is being undermined by financial decisions and, as a result, we are failing to protect vulnerable groups in particular.

I want to focus on a vulnerable group who are often overlooked, namely young carers. At present, severely disabled adults who are living without a non-disabled adult to provide care for them may be eligible to receive the severe disability premium, which is intended to help them with the additional costs they face. The Government have proposed to have no equivalent of the SDP in universal credit. They propose to use the savings from the SDP to raise the level of benefit paid to those entitled to receive the higher disability addition. However, once universal credit has been fully implemented, severely disabled people with no adult to assist them will be entitled to about £58 less a week than those in the current system.

Between the Office for National Statistics censuses in 2001 and 2011, there was a 20% rise in the number of unpaid carers. As a Welsh MP, I am particularly concerned about the issue, because Wales has a higher proportion than England of young carers providing unpaid care. More than 11,500 children in Wales aged between five and 17 provide unpaid care. If their parents do not have support and protection through universal credit, those children will face additional disadvantage. In four out of 10 households with a disabled lone parent, children help them for more than 15 hours a week. Around 25,000 disabled lone parents receive the severe disability premium. In those families, young carers, especially children aged over 10, are taking on a significant caring role.

The impact of the loss of SDP could be very severe: 83% of those who are eligible for it said that a reduction in benefit would mean that they had to cut back on food, and 80% said that they would have to cut back on heating. Will the Government please consider implementing the Children’s Society recommendation that universal credit should include a self-care element to provide additional support to disabled adults who have no other adult to look after them, to help them with the additional costs that they incur and to ensure that the burden of additional care costs is not placed on young carers?

On Friday 27th May we were out on the doorstep again, this time in Neath Abbey joined by Cllr. Mike Harvey and Debbie Harvey, another great doorstep response. 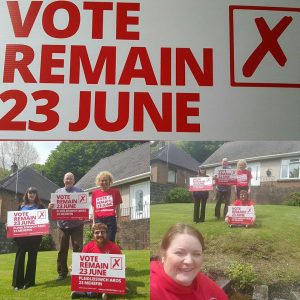 Saturday 28th May it was National Women’s Campaign day so I headed into Neath Town Centre with a great team, we had a very good response from the public with a tremendous amount of REMAIN votes, really great to see. 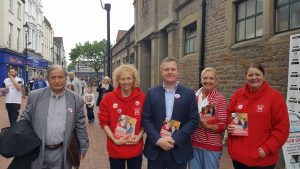 On the afternoon of the 28th May I attended the Seven Sisters Ladies Presentation Dinner, it is always a pleasure to send time with such a great team who I value as great friends. I was taken by complete surprise when they made me the first ever Honorary Patron for Seven Sisters Ladies, I was proud, privileged & honoured to have received this award from a team that mean so much to me and who are simply the best. Thank you once again. 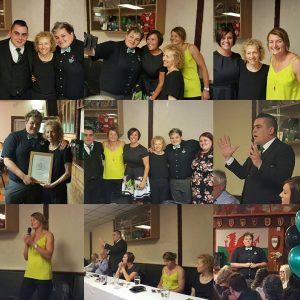 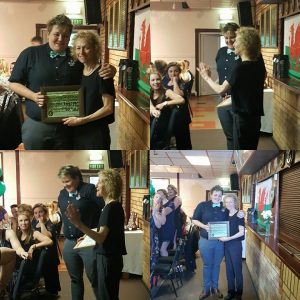