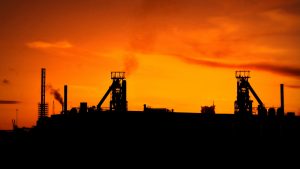 Neath MP Christina Rees has today called upon politicians to end their interference in the current negotiations between TATA and the Unions and support them in their attempts to agree a way forward for the industry.

“We all know what a difficult time steelworkers, many of whom live in my constituency, have been going through this past year and instead of berating their Unions at a time when they are breaking their backs trying to find the best way forward for their members they should be supporting them’’, she said.

“When I hear publicity-seeking politicians from other parties accusing shop stewards of betraying their members or casting their members adrift I get very angry. Those of us politicians who work closely with Unions know and understand that there is a huge amount of strategic moves which take place behind the scenes in any negotiation aimed at securing the best deal possible before this is placed before the members. In these negotiations with TATA the Unions have had to walk a tightrope between obtaining the best outcome without the company having an excuse for walking away from the steel plants.

“The shop stewards who sit on the National Joint Union Committee are also employees at TATA with families of their own and must bear the outcome of the very negotiations which they are involved in. They are representatives elected by the workers in the plants and have a great desire to obtain the best deal, and the securest future for their members and their industry. They are not traitors as some politicians would have it.

“The tactics employed by the Unions since before Christmas has obviously worked to some degree as TATA, being mindful that their previous offer was not good enough to secure a recommendation from them, made improvements to the offer in talks in London this week. The Unions clearly believe that this is the very best which can now be achieved via negotiation and, recognising the grim alternative, have reluctantly recommended it to their members.

“It is now for the members employed by TATA to decide in accordance with the Unions’ democratic procedures. As a proud member of a Union (Unite) myself, I know that whatever the members decide – to accept or reject the offer – they will have the support of their Unions and my support also.”